This morning, I talked hubby into getting up early to go on a warbler walk with me. I knew the warblers have been passing thru and I know of a local park where warblers seem to hang out on their way south. This park is very birdie especially early in the morning. I ran into some other birders from the bird club I belong to, so I am not the only one with warblers on their minds. In the past at this same park I have seen the Prothonotary warbler which was a very nice surprise. So I never know what I might see here. This is a picture of the Prothonotary Warbler I saw last spring. 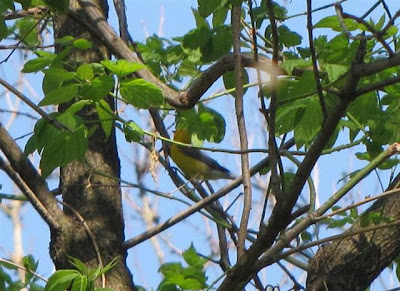 The walk started off with a few Northern Cardinals, a lot of Robins, and this bird below which I believe is an Eastern Phoebe. 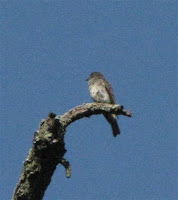 We walked along the trail which follows along a stream this area was very birdie but the birds stayed high in the tree tops and it was difficult to focus on them due to the leaves and they were constantly moving. A Great Blue Heron was fishing in the stream. The Robins were everywhere, in the trees, on the ground and just about everywhere we looked.

I am still learning to id my birds and seeing warblers in the fall is very difficult
for me. I saw a few of the Black & White warblers, they are easiest for me to id compared to some of the other warblers. I think even a non-birder could id a B&W warbler. LOL! The male American Redstarts were looking pretty. 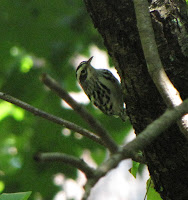 This is a picture of one bird I saw today, I am undecided if it is a Bay-breasted or a Northern Parula. Or something totally different, I have been way off before. Maybe a Vireo? Someone has also mentioned my unknown bird is a Chestnut-sided Warbler. 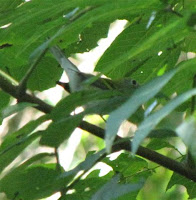 Some of my fellow bird club members pointed out a Canada Warbler and a young Baltimore Oriole. I compared some of my sightings with them and we went on our separate ways. Hubby and I went on to try and find a Wilson Warbler that the others had seen but was hiding from me. The Wilson Warbler will have to stay on my want to see list of Warblers.

Further along the trail we saw this bird on the ground in a more wooded area. I am pretty sure it is a Veery. 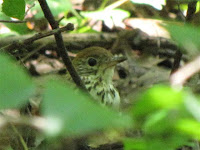 These two sightings are not of birds but I found them to be interesting. I am use to seeing Woolly Caterpillars but the color of this one is new to me. Also we saw some berries or is it some kind of fungi growing on the ground. They were both seen in wooded part of the trail. 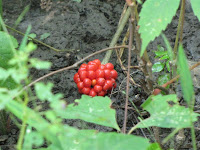 I still have a lot of warblers on my list to see so I am sure I will be going on many more warbler walks.
at August 30, 2009

Happy Monday!! I wish everyone a happy day and a great new week! Bainbridge to Seattle Washington ferry.  Comments off, enjoy your day! 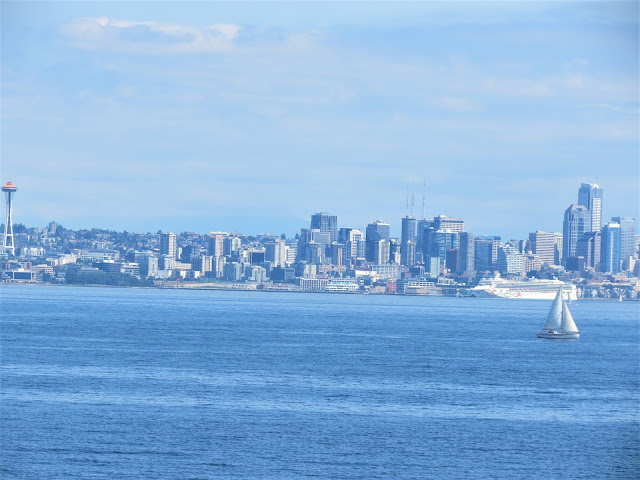